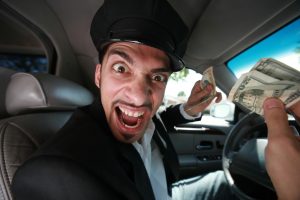 One of the great dangers of the ride-sharing app revolution is that you will often times come across those who take advantage of the system and use it for nefarious reasons. People find traveling to and from the airport to be an incredibly nerve-wracking experience and this is where predators are likely to strike. This was the case this week as a young actress was nearly abducted by an imposter claiming to be a ride-sharing driver.

The actress, Lili Reinhart, who is a star on Riverdale, was approached by a man acting as a driver and when she approached the vehicle sensed that something was off and decided to leave the situation and narrowly avoided disaster. Following her episode, Reinhart took to Twitter and warned her millions of followers about the dangers associated with ride-sharing, especially those associated with young women traveling alone.

Reinhart wrote: “PSA: I was just ushered to a car by someone posing to be an airport cab/Uber driver. I got to his car and there were absolutely no signs that he was a professional service driver. So I did NOT get into the car.

Please pay attention and make smart decisions out there.”

She would continue the conversation in a follow-up tweet stating: “Seriously… please be careful out there. You don’t have to be nice or worry about being rude. Trust your gut. It could save you.”

The security of ride-sharing apps has been a hot topic of discussion among news organization and legislatures across the country. Since most individuals use ride-sharing apps to travel while consuming alcohol or during stressful traveling circumstances where all you really want is to go home and drop your bags down. These are situations where the consumer is much more at risk and may be getting into a vehicle without checking the license plate or looking for the stickers denoting which ride-sharing company the person may be driving on behalf of.

States are looking to make these companies start taking security and the well-being of their customers more seriously. There’s a reason for that. These companies are seeking to maximize their income while the only way to remove drivers through their systems is through negative reviews. Bad faith actors may not face repercussions if customers do not do reviews or if they continue to drive despite bad reviews.

These companies have not taken security into account until they have been forced by bad public reactions to tragedies like the one Lili Reinhart narrowly avoided at the airport earlier this week. They focus on providing the bare legal minimum in protecting the customer and cracking down on fraud and bad drivers. Until the ride-sharing apps can be cleaned up and begin to prioritize the safety of passengers on their rides, these apps should be avoided and we should seek out more traditional means of traveling, especially to and from transit centers like airports and train stations for our own safety. Traditional Luxury transportation, like limousine services have drivers, that have gone thru fingerprints, and background checks by the law enforcement, and the cars have been inspected thoroughly by Department of Motor Vehicle to be fit for public transportation. These meticulously maintained Luxury cars are also clearly marked by the License plates showing as registered Limousines.