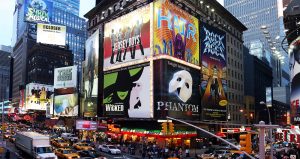 As your New Jersey and New York Car service we hear lots of things from our passengers. Below you will find information about the ones they tell us about most.

New York City is one of the cultural capitals of the United States. The home of Broadway and live theater. Once we at American City Express, take you from the Newark Airport to the heart of the city, you should be sure to catch a show at our famous, world-class venues. No trip to NYC is complete without a trip to the theater and a return home with a playbill. So what should you see? What is even out right now? Let’s break it down.

Ain’t too Proud – The Life and Times of The Temptations

The perfect play for the Motown lover in your life! This is a brand new musical based on the story behind one of the most popular groups of the 1960’s and 1970’s.  This musical follows the group from their origins in Detroit all the way through their induction in the Rock and Roll Hall of Fame.

Are you a fan of the Disney movie? Well this live action version is one of the most seen and most successful musicals in Broadway history. Much like his work in the film, Elton John prepared the score for this musical. This adaptation has been the recipient of six Tony Awards, and has surpassed over one billion dollars in gross sales. It has been running in all sorts of cities around the globe since its original tryout in Minneapolis in 1997. Join the over 95 million people worldwide who have experienced the story of Simba, Mufasa, and Scar!

Another play based on a historically applauded movie! Wicked is the story of the Wicked With of the West and her sister Glinda the Good from the Wizard of Oz. The story follows the sisters long before Dorothy and her little dog Toto came crashing into the magical world of Oz. The original run of Wicked won three Tony awards, and has been a staple of the Broadway scene for several years.

The Phantom of the Opera

The longest running Broadway show in history is this staple of live theater. The quintessential Broadway play is the very definition of a must see for any visit to New York City for theater fans and even those who rarely give theater a chance. A story of romance and madness that has kept audiences entertained for decades.

The Book of Mormon

From the creators of the hit television satire South Park comes the 2011 Tony winning music The Book of Mormon. This play is a satirical look at two Mormon missionaries sent to Africa to spread the word of Adam Smith the founder of the Mormon religion. A nine time Tony Award Winner which is sure to have you rolling in the aisles with laughter.

Another incredible adaptation of a Disney classic which has taken the Broadway audiences by storm. With a live adaption movie about to debut in the coming days, now is the time to reacquaint yourself with this incredible story of Aladdin, Jasmine, and the ever incorrigible Genie.