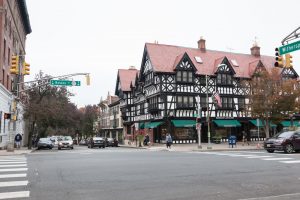 Princeton has an excellent geographical location. It is located right in the middle of two major cities New York and Philadelphia. It is approximately 40 miles from either city. Located right by Route 1, it is easy to drive 10 miles to NJ Turnpike and be in New York City in an hour. Just 10 minutes drive on rt one southbound would put you on rt 295 and be in Philadelphia in about an hour.

Along with the proximity to the major highways, Princeton also has Northeast corridor train lines running through it. You can choose between Princeton or Princeton Junction train station, where you can hop on a train that will take you right to the 30th street train station in Philadelphia. If you take the New Jersey Transit towards the Penn Station New York, your journey is about 45 minutes. There is service from Acela available to go to Boston or Washington DC as well. Princeton also has a state of the art medical facility located very close to the University and downtown.

Downtown Princeton is just breathtakingly beautiful. It is lined up with trees, small cafe’s and restaurants along the street, right across from the University. Like any other downtowns, it certainly has your Starbucks, but also has other cafes that would offer you Gourmet coffees and bagels. There is also a lovely hotel called Nassau Inn right on the palmer square. The historic hotel has been fully operational since 1769. The hotel is conveniently located directly across the University. Due to its proximity to the University, the hotel stays occupied. The hotel has been the host to our founding fathers — many staying at the hotel during the continental congress meeting at the Nassau Hall. George Washington won a battle against the British forces in the battle of Princeton.

Princeton has an abundance of parks, trails to go hiking and is lined up with Delaware and Raritan Canals. The University regularly holds canoeing competitions. The scenery along the canal is just breathtaking. Within 1 mile of the University, there are seven parks located, which gives the residents and the students options to enjoy the outdoors. Princeton also has a variety of choices when it comes to the restaurant. The downtown area is a host to multiple Italian, Mediterranean, and Asian flavored food.

When it comes to traveling to the airport, Princeton New Jersey does not have a direct route to the airport via Trains. Your option is to take either taxis or a reputable car service. American City Express offers an excellent service right from your home in Princeton, or if you are a student, we can pick you up from the Dorm. We provide the peace of mind and luxury when traveling to Newark airport for only $89 fare. American City Express is the name to remember for your travel needs to or from Princeton new jersey to Newark airport. Open 24 hours a day, seven days a week. Customer service agents are always available to help you with the reservation and dispatch.