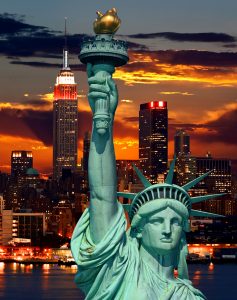 Are you headed to the city that is so nice they named it twice this month? If you are, New York City offers an overwhelming amount of activities and tourist locations.

The New York Yankees are the city’s most historically relevant franchise. With twenty-seven world championships under their belt, the Bronx Bombers are looking to reach 28 this year. In May, the Yanks will have home series against the Tampa Bay Rays, the Seattle Mariners, the Baltimore Orioles, will have an interleague series against the San Diego Padres, and will close out the month against their biggest rivals the Boston Red Sox.

If you are a fan of the underdog, the New York Mets will have twenty consecutive games throughout May. During that period they will have numerous home series at Citi Field. Those series include the Miami Marlins, a four game set with one of their biggest rivals the Washington Nationals, and they will close out the month with an interleague series of their own with the Detroit Tigers.

If you are looking for something different or are a fan of women’s professional basketball, the WNBA’s New York Liberty will face the Chinese National Team in Brooklyn at the Barclay’s Center on May 9th.

What’s a trip to New York City without swinging through The Garden. With the Knicks off until the Fall, the Garden is home to so many amazing concerts in May. Billy Joel will be making the short trip from Long Island to the city for another one of his storied Garden concerts. Are you a fan of classic rock and want to see one of the great rock acts of all-time, The Who? They’ll play MSG shortly after Billy Joel. Then there’s a two night stint for pop icon, Pink. The month of music at The Garden concludes with rapper and singer Anderson .Paak.

New York City is home to some of the most amazing periods in United States history and has been a major part of our country’s history.

Ellis Island is the great gateway into the United States. It is where ship after ship of immigrants came to this great nation to start a new life and see first-hand everything that the country had to offer. It is now a museum that you can visit and experience.

From the windows at Ellis Island you can see the beautiful statue that once greeted everyone who came to our country. The Statue of Liberty is available for touring and you can walk through the inside of the statue that symbolizes America the world over.

The Empire State Building, when people think of New York and the famous skyline, this is what they think of. It’s been featured in so many incredible films where actors and actresses agree to meet up with the loves of their lives. Located right in the heart of the city, this historic building allows for anyone to come in and head up to the observation deck and look out at the city that never sleeps.

For much of America’s two hundred plus years, New York has been the artistic capital of the country. The home of so many shows and programs as well as Broadway, the national home of theater. Currently, Broadway is showing so many new and traditional great plays. The first of which is The Phantom of the Opera, one of the greatest plays ever written. If you are looking for the traditional Broadway experience this is it! Another classic play currently running on Broadway is Chicago.  The two plays are must attends for any theater fan.  If you are looking for something new and hip out of your play, Broadway offers Waitress. Waitress was nominated for a Tony in 2016 and has wowed audiences ever since.

There may be nothing in New York City more New York City than Times Square. Here you will see street performers. Either those in those crazy knock-off Sesame Street or Marvel costumes, or the ladies who look like Rockettes, or even some people playing instruments or singing. You’ll see those massive billboards synonymous with the city. You will see restaurants and clubs and every sort of business imaginable. You’ll see people handing out tickets to comedy shows and other quintessential NYC events. Walk from corner to corner and see everything we have to offer!

They don’t call it the city that never sleeps for no reason folks. From Irish taverns to English pubs, to dives and dance clubs New York City provides every person with every possible option to enjoy a casual happy hour or dance the night away. So if you’re someone who struggles making decisions about what you want to we’d suggest heading online and checking out your favorite types of bars and how close they are to where you’ll be staying.

As diverse as the nightlife is in New York City, the food fare is even more so. New York City is where all the best chefs in America and from around the world come to see if they are good enough to make it. From holes in the wall to five star restaurants you can find whatever you are looking to munch on.  If you can’t decide and end up just walking from block to block staring into the windows, you can always hit one of the great food cart options on just about every corner in the city. Us? We recommend out favorite restaurant in the city, the Nutella Café. If you love Nutella, this place is a must visit and you should even go out of your way to go there and enjoy all of the delicious food. You’ll be happy you did so.